If You Live It Right

My grandfather, the judge Mother

in my memory as an obelisk of

a man with a white goatee and

bifocals perched on a Roman nose.

In his small study he occupied

the lone armchair at the mahogany

along the bluish walls, pulling at

a sweet incense-like aroma that still

lingers in my nose though I am now

almost his age with graying hair.

He knocked open the door to

the great mythical worlds of

the ancients in his usual meditative

way, regaling me with stories –

the words flowing from his mouth

laced with the aroma of the smoke

that curled up gently into the air –

of Rama’s reign of eleven thousand

years; of Noah living over nine

from extinction; and Thetis’s son

of Troy, the demigod’s very cry

sending tens of Trojans to death.

“But I won’t live for centuries,

eyeing the floral teacup before him.

nor am I a demigod.” He met

my eyes: “No matter.” Adding

with a smile that kindled his face

and knots of joy and grief, all

interlaced and locking. But if

you live it right, one life is enough.”

Note: The Italicized lines are quoted from Valmiki’s Ramayana, retold by William Buck.

From the Loins of Nadir Shah

As the wolf cannot be a shepherd

neither can a tyrant rule.

He claimed to have descended from the fabled

loins of Nadir Shah, as the bushy-browed

General with an avid desire for women and liquor

boasted of his notorious Persian progenitor.

wife of a police officer, with a sharp wit and

a ready smile, who tossed her burqa in the wind

to trade in girls for high society in Rawalpindi.

Soon she became his domestic partner though

his first love was always liquor, and by and by

her flapping dupatta sang of General Rani in

the air, who was mired in her country’s affairs.

With a bottle of whiskey in his hand and his

to rob the treasures of the Bengal delta like

Nadir Shah the riches of once wealthy India.

So stepping into the shoes of his progenitor who

had sacked Delhi over two centuries ago, he let

loose hell in Dhaka on a March night in ’71,

But while the victorious Nadir quit Delhi in

with tons of rupees and diamonds, gems and

Yahya was obliged to cede half the nation after

nine months of combat and carnage and millions

blown to bits, to the valiant tigers that had

risen after slumber in unvanquishable number.

ancestor, he bowed out parting with the ribbons

and medals that had adorned his chest to live a

Left alone with his liquor, to potter about his

house without power, he escaped the fate

of his progenitor, who had lost his head

to the sharp knife of his wayward commander.

When his life-long affair finally caught up with

coffin before its journey to the hereafter, doused

in the sighs and cries of millions and their pain.

We’re made in God’s image, says the Good Book.

But God can’t be found by reading a book.

We must peek for God deep into our hearts.

That can’t be taught by prayers in a book.

Shakespeare can’t be made by studying Shakespeare,

Claims the gifted Emerson in his book.

We can find it in William Golding’s book.

We must cultivate our garden, so says

Voltaire after Candide’s trips in his book.

God will show up in our deeds when goodness

Rules our hearts, not the phrases of a book. 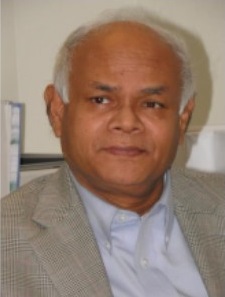 Born in Dhaka, Bangladesh, Ronny Noor is an award-winning professor and writer. His poems, stories, and essays have been published around the world, in journals and newspapers including Short Story, South Asian Review, The Toronto Review, Kokako, FreeXpresSion, The Ghazal Page, The Daily Star, and Contemporary Literary Review India. He is also the author of Snake Dance in Berlin (a novel), Slice of Heaven and Other Essays (an anthology), and Where Heaven Spreads Wide & Other Stories (a collection).