Book Review on Ramachandra Guha’s The Commonwealth of Cricket: A Lifelong Love Affair with the Most Subtle and Sophisticated Game Known to Humankind

Suppose you are a cricket fan, relaxing on a Sunday afternoon, having just had your fill of a delicious lunch. You wish to read something about the sport that you love; something that is both entertaining and honest. Ramachandra Guha's 2020 book The Commonwealth of Cricket: A Lifelong Love Affair With the Most Subtle and Sophisticated Game Known to Humankind would perfectly fit the bill. Divided into eleven chapters of varying lengths, the book traces Guha's own journey with cricket from his boyhood days in Dehradun in the 1960s to his stint as an accidental cricket administrator in the late 2010s. 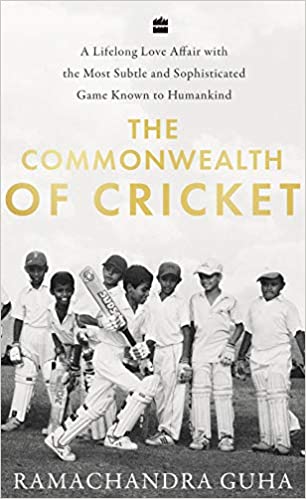 The historical and autobiographical elements of the book perhaps come together best in the fifth chapter (Handshakes with Heroes) where the author blends his experience of meeting and shaking hands with some titans of Indian cricket – including Tiger Pataudi, Polly Umrigar, Kapil Dev and Bishan Bedi – with factual details about them.

There are also other memorable chapters in the book. The sixth chapter (Sightings of Sachin), for example, is unstinting in its praise of the great Sachin Tendulkar. (Promptly, and relaying the pulse of a majority of the Indian cricket fans of the 1990s and early 2000s, the author dubs the time in which Tendulkar played the Age of Sachin.) The chapter also sheds light on Tendulkar’s seemingly obsessive pursuit of records, however, and wonders if that might have had a role to play in significantly delaying his retirement from the game he so obviously loved, and which he decorated with his greatness and his grace.

The eighth chapter (Some favourite Pakistanis) offers fascinating pen-portraits of some of the greats of Pakistan cricket, including Hanif Mohammad, Javed Miandad, Imran Khan, Abdul Qadir, Wasim Akram and Inzamam-ul-Haq. The chapter reminds us that it is possible for sport and politics to remain separate, at least in a fan’s mind.

Of the remaining chapters in the book, the ninth and tenth chapters (Accidental Administrator and Exiting the Establishment) are as engaging as the first (Cricket in Paradise), but for different reasons. The latter paints exquisite pictures of cricket under blue skies in beautiful Dehradun, where the author’s uncle Durai became his first cricketing hero and mentor, and where he was introduced to cricket literature by his father. It also underscores the role played by the Friends Union Cricket Club (FUCC) in Bangalore in his early development as a cricketer. The former chapters present an honest – but not self-aggrandising – account of his sincere, but ultimately futile, attempts as a member of the Supreme Court-appointed Committee of Administrators to rid Indian cricket of inveterate bad habits such as conflict of interest, nepotism and superstar culture.

The remaining chapters in the book also have the potential to engage the attention of a cricket aficionado. The second chapter (An Eleven of One’s Own) offers excellent recollections of India’s first overseas Test victories in the 1970s and of the rise of Karnataka, and later, teams from other states, to challenge Bombay’s supremacy of many years in Indian domestic cricket. The third chapter (Eavesdropping on Greatness) reflects on the fortunes of some remarkable cricketers with whom the author played the game at St. Stephen’s College (Delhi), while the seventh (appropriately named A Hindu’s Pantheon) celebrates the achievements of his favourite international cricketers, both Indian and foreign. As for the fourth chapter (You only live twice), it recounts the life and times of the many stalwarts who have played cricket for Karnataka, the one team of which the author remains a partisan fan, as he admits in the final chapter (Varieties of Cricketing Chauvinism) of the book.

Even for the casual cricket fan, the book offers at least two things: a number of All-time Elevens and many colourful anecdotes. So, what is our favourite passage from the book? Well, it would have to be the heart-warming account of the time when the author, travelling in Bangalore with his uncle, got to shake hands with one of his childhood heroes, the much beloved G. R. Viswanath, who was attending to his scooter.

In conclusion, the book has something in it for cricket enthusiasts of both the scholarly and regular kinds. Some of the details in the book may appear obscure to some and unimportant to others, but they subtract nothing from its overall excellence. We therefore recommend it unreservedly to anyone who is even slightly interested in cricket.