IT WAS RAINING IN TORRENTS for three days. Occasional thunder woke up a ten-year-old lad before the hammering on pegs and shlop-shlop of clay could get him up to what he was used to-------an alarm for him. Parijat, only in half-pant with his hair unkempt and eyes full of dream was staring at the thousands of eddies into a pool of the flooding courtyard crafted by the millions of slanting drops descending from heaven .In all these years the boy (though a brief span of life so far) had learnt that every year the monsoon brings misery to Kumartuli. The traditional potters' quarters in this northern pocket of Kolkata had seen many ups and downs since the British era. Those artisans were magicians...the enchanters...had been putting life in clay years after years laughing and shooing away their inherited poverty.

Parijat presently thrust his hand into his pant pocket and took out a miniature model of lord Ganesha, made of baked clay. He always kept the idol with him-------in the school, in the bazaar or within the gaps between the worn out bricks on the compound-wall of the Sabuj Maidan (Green Field) while playing football or romping half-naked across the ground in the rain.

His sleepy eyes were looking through the rusty window-rails at the unfinished idols of Durga, Laxmi, Kartik, Saraswati, Ganesha, Lion and Asura--------all mounted on rough bamboo platforms in a line--------still lifeless.

Suddenly, a very serious question troubled him, 'Shall we've new clothes this year in Puja?' Then he wondered, with his grandfather’s occasional asthmatic fit and the unceasing rain how the pending works would be carried out in time.

He knew that each year after Mahalaya his father took them to The Modern Garments and let them have their choices to a little extent. Smile played over their faces getting their much-awaited new dresses, however cheap they would be.

Presently, he jumped off his bed and putting his endeared little Ganesha on the stack of books came out to the courtyard to discover the floating dark clouds through the gaps of multi-coloured polythene canopies placing over the idols. The entire ground was submerged--------looking dull for Parijat. He hated seeing those beautifully crafted idols getting melted away under the descending rain. How the creativity and hard labour of man can give way to the wrath of nature irritated him. Millions of water-pellets were pattering upon the polythene canopies.

He stepped ahead and plopped his feet into the puddle and quickly paddled across to reach a little ahead under a canopy of polythene. Parijat moved ahead to the idol of Maa Durga. Presently, he rubbed both of his palms on his pant to dry and ran his fingers over the finely sculpted folds of sari the goddess was attired in clay. Then the boy gently rubbed his fingers over the half-finished cascade-curls in clay waving down the goddess' waist-------an excellent specimen of masterpiece by his old grandfather Girija Dadu, as he was popularly known in the nooks and corners of Kumartuli, famous for his speciality in making Devi Durga's hair in clay: even the minute curves furrowed through the thick plaster of clay by his old, slender fingers could easily deceive the viewers to have fallen into the misconception of the hair being a silky wig. Now an asthmatic patient in his late nineties with his eyes sunk in sockets Girija Dadu was bed-ridden for more than a week. The lad counted on and found that more than fifty idols were still left unfinished with barely twenty days in hand. Parijat was not bothered about the rest of the works : surface-claying, drying, painting and varnishing-------everything would be furnished in time except the hair-designing, the speciality of Girija Dadu without which it would remain a clay structure, absolutely lifeless.

'When'll the goddess' hair be finished, as Girija Dadu is lying ill for days?' wondered the boy remembering how a few days ago a sudden fit of asthma made that old man huddle into a corner of the room, coughing, panting and struggling for life.

His father told him many anecdotes of his old grandfather's unforgettable feats--------once the Jamindar of Raghunathpur had rewarded young Girija with a shiny pearl chain for his extra-ordinary skill; in another time, an English officer, who happened to pass by Kumartuli stepped into the lanes and so was enthralled by Girija's skill that he commissioned him with a sovereign to make a miniature model of Durga to take it as an asset to England.

Still those were souvenirs in a wooden box in spite of perpetual disease and hunger.

Parijat suddenly felt for the old man and ran into a cramped, tile-roofed chamber. The old man opened his eyes to see his grandson at his side and coughed. Lying on the bed he was likely to have been waiting for his final summon.

Old Girija drew a long breath looking at the lad wistfully. He knew that fifty thousand from the Agrani Sarbojonin Utsav mattered a lot--------feeding so many mouths throughout the year on one-time income. More over the child must not be deprived of new clothes.

Astonishingly, that night it did not rain.

The next morning saw a faint orange glow in the eastern sky and the twittering of sparrows. The whole night was disturbing for Parijat for some infiltrating thoughts--------ailing Girija, unfinished hair of Maa Durga and above all the clouds of doubt over the prospect of having new clothes. The lad came out rubbing his sleepy eyes. The faint orange glow could not fully blot out the existing darkness over the October sky. Water level across the lane receded. The whole town was in slumber.

The boy was now standing before the idol of Durga just out of a childish whim. But, what he saw shocked him utterly: Durga's complete hair, locks dangling divinely still soft and wet.

The lad ran for the old man. To his horror old Girija was lying stiff on his bed. First, a gentle push and then some repeated ones but he was unmoved; died of asthmatic fit.

The traces of clay were still peeping out of his nail-tips. 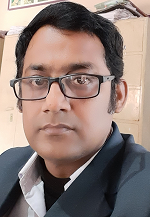 Debasish Banerjee completed his Master's in English from Burdwan University of West Bengal. At present he is teaching as a teacher of English literature and language in Arcadian Public School, Mathura, Uttar Pradesh. He writes stories both in Bengali and English. Some of his short stories appeared in journals such as Border View (West Bengal), Bengali online and print magazines like Barnik Sahitya, Anubhuti Prakashan, Ujan Sahitya Potrika. Recently, his short stories got published in some issues of Contemporary Literary Review India. His fiction titled "The Rose was as Vain as the Geraniums" appeared in the YAWP Little Magazine (Silchar, Assam). His short stories "His Paradise Lost" and "A Letter from Pakistan" appeared in a Bengali newspaper Shilpaneer.

Get Your Book Reviewed If you have a book review on a book, send it to us. We will publish it free. We don’t charge any fee for publishing. The quality of your article will decide whether your article will be published. If you want us to review your book, we charge for this. We have a good number of review writers with us. We have different review writers for books of different genres. Our reviews are gaining recognition among the publishers, journals and academia for fair and high quality reviews. Write to: clrijournal(at)gmail.com Contemporary Literary Review India